The End is the Beginning

Hey there everyone! If you are following this account it’s very likely that you took part in the Beginners Circle Jam #3 with us during the month of October in the year 2020. It’s been a few months since then, but because the official results have finally come out, we thought it would be the best time to post an update on the Wanderer Project.

As some of you may know already, Monsters Must Die started as a partnership between my lifelong friend Endre and myself (Arturo) on an epic self-imposed quest to make the kind of games we like to play.

Actually no, things are more complicated than that, but let’s just assume for a minute things are simple ok?

The point is, after so many years of drafting a ton of ideas that never came to light, we finally bit the bullet and dove head first into the fray by signing up on the first game-jam we could find.

Armed only with naïve expectations, perfectly timed vacations and our wives blessings, we embarked on the two week long adventure that would kickstart our gamedev adventure.

To our surprise (and delight) the random theme for the jam was “a different planet” and being the scifi nerds that we are, we got to work immediately with giant grins on our faces.

The end result: Wanderer, a bite-sized card battler where you punch aliens in the face with your mecha-fist!

And although it only secured an honorable mention, we couldn’t have been happier and thankful for the experience and the result.

Let me give you some context.

I personally come from the cruel world of advertising and film making. Endre on the other hand is a professional web developer. Neither of us had ever made a game before. But we did have one thing in our favor: We are really good at project planning, management and delivery.

When you deal with clients in the real world, there is no such thing as a missed target (heads roll otherwise).

So, being very conscious of the time limit and designing the game around our own game dev skill limitations while simultaneously factoring in our strengths, we laid out a plan and stuck to it. The rules we set for ourselves were, 1. Something short. 2. Something sweet. 3. Something complete. And of course, 4. Something in-theme.

As far as we can tell, we nailed those targets. Mission accomplished!

Here we are, three months after the original jam that started it all, and guess what, although we delivered on target, and even though the dust has settled, the jam itself a closed deal and the hype scattered into the wind, the one thing that hasn’t died out is our passion for game making.

Determined to push this project into what we call its “full form” we have continued to work on it. Rebuilding all of the rushed code, giving all of the art assets a complete overhaul, tuning the gameplay mechanics and even expanding the content.

More monsters to punch in the face. More alien vistas to stomp around in. More events to challenge your wits. More cards to play with!

So, don’t be shy, join us in our adventure. Come along for the ride. Play the jam version, drop some feedback, share your thoughts, start a conversation! We are here to learn from you and the community!

Also stay tuned as we release more news on the project and update the build for you to try out.

Signing off for now and leaving a sneak peek at the updated visuals. What do you think? 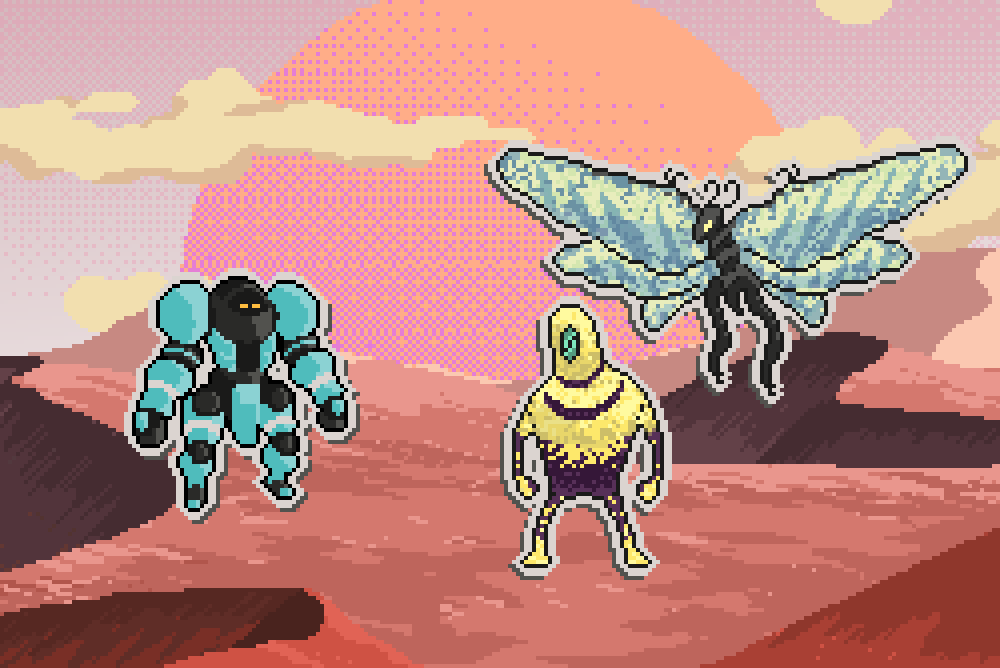 A bite-sized card battler where you punch aliens in the face with your mecha-fist!

those new visuals look awesome, excited to see more colors and enemies introduced in wanderer from its monochromatic looks. keep it up guys!

Reply
Monsters Must Die!1 year ago

We have shifted the top down perspective into a side view, and every location has new animated background art, as well as  environmental effects that modify combat conditions. The monster gallery was expanded too with the introduction of monster abilities that require more than just matching a to-hit number, so combat itself should be more interesting and challenging!

Thank you so much for taking the time to check out our update. More to come in the coming days!

I'm really looking forward to the further development of Wanderer :D
I loved the Cover and the design, my only big problem that got me struggling with the game was, that i didn't understood the mechanics. I totally understand, that when you are so indepth in working on it, that the mechanics got 2nd nature for you... but I think the game can gain a lot by a well made tutorial level holding the players hand a little bit.
I hope this GDC talk will be helpful:
GDC Tutoriak press A to skip

please don't take my critizism bad, i see how this game is already well polished for a 2 week project.

Keep gamedeving! I want to play your future games!!

Yesss! We definitelly got that feedback overall. Lesson learned. At this point a full hands on tutorial is in line for the post-jam release. Thank you so much for taking some time to drop a comment and following the project. We can't wait for the day you can give our game another try with the relevant fixes and upgrades. Thank you once more! :D